As we are heading to winter in Hungary, let’s introduce two Hungarian specialities to you that may sweeten winter days …

Chimney Cake is a popular pastry in Hungary. Earlier it was a festive treat, but nowdays thanks to its popularity more and more sellers have popped up year-round. It is made from sweet, yeast dough, of which a strip is spun and then wrapped around a truncated cone-shaped baking spit.  It is then coated in sugar and baked in a special oven. The caramelised sugar on the surface creates a sweet, crispy crust while inside the dough remains soft. The surface of the cake can then be provided with different additional toppings (eg. cinnamon, walnuts, almond, coconut etc.).

As Central and Eastern European dish, plum dumplings have a long tradition in the Hungarian cuisine too. The potato dumplings are stuffed with plums, cinnamon sugar and then rolled in breadcrumbs. The plum dumplings can be served as dessert, as main dish or side dish. 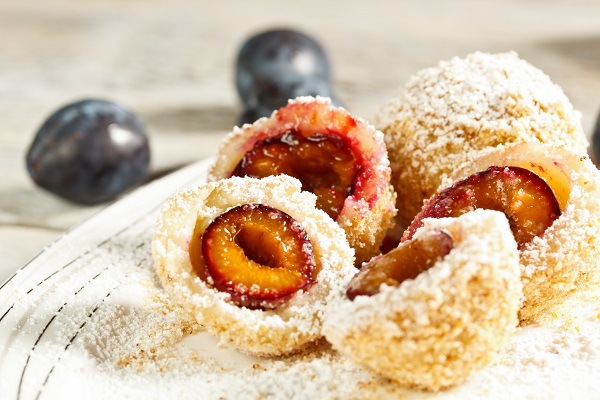 Something for the Team Spirit: Foodie Hunt
We use cookies to ensure that we give you the best experience on our website. If you continue to use this site we will assume that you are happy with it.OkPrivacy policy
Scroll to top